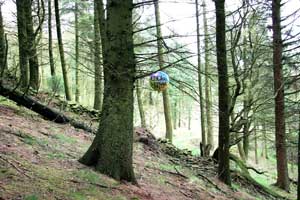 Reprieve Lamda print. I found a deflated congratulatory balloon caught in a tree in Macclesfield Forest. It was around the time of David Camerons U turn, due to public pressure, on the privatisation of publicly owned woodland. I reinflated the balloon, returned it and photographed it to celebrate the woodlands repreive. edition of 25, 2011, Exhibited in And Scent of Pine and the Woodthrush Singing, solo show at Castlefield Gallery

Hybrid Found tree with turned base A found silver birch tree suspended fromt he ceiling of the gallery. The bottom section of the tree has been tunred by professional woodturner SarahbThirwell And Scent of Pine and the Woodthrush Singing, Solo Show at Castlefield Gallery 2011

Souvenir found knott of wood installed into the wall as a peep hole to view a slide projection of over 60 vintage found slides of woodland and landscape, some examples of which follow on from this image, 2011, Solo Show Castlefield Gallery

And Scent of Pine and The Woodthrush Singing, solo show at Castlefield Gallery Manchester 2012. Much of the work in the exhibiton was inspired by time spent walking and collecting objects found in Macclesfield Forest, a sustainable working forest on the Peak District, Cheshire border. The exhibition also explored issues surrounding the privatisation and use of publicly owned forest and woodland.

In 2012 public protests were underway regarding the proposed sale of publicly owned woodland and forest by the Tory government. David Cameron finally bowed to public pressure and agreed not to sell. Around this time I found a deflated helium balloon, prited with the word “Congratulations” snagged in the branches of a tree in Macclesfiled Forest. I took the balloon and had it reinflated and replaced it in the tree to “congratulate”  all forests on their reprieve. I photographed it and titled it “Reprieve”

Other works in this exhibition include Hybrid, a twenty foot tall silver birch tree suspended from the ceiling of the gallery. I found the discarded tree in Macclesfield Forest and had the base of the tree “turned” by a professional woodturner to resemble a table leg. The intention being to reveal the inherent usefulness of a discarded tree.

Souvenir is a found knot of wood used as a peephole to view a carousel of vintage slides from the 60’s and 70’s collected from ebay depicting wooded landscapes, wooden objects, deforestation and of snapshots of families captured in woodland.