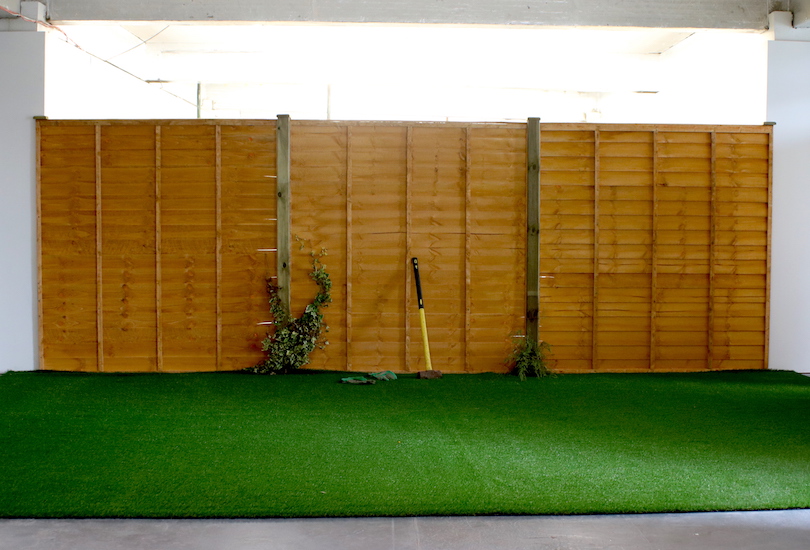 Little Britain, Larch lap fencing, astro turf, Hilary Jack 2019, with accompanying video documentation below. Grateful thanks to Salford Councillor for Sport and Culture Stephen Cohen for “opening” the exhibition.
For Buffer Zones I installed sections of larch lap fencing and astro turf across the gallery opening therby preventing visitors from entering Buffer Zones an exhibiton curated by Nat Pitt, Divison of Labour. Larch lap fencing – the ubiquitous dividing line between neighbouring homes in the English suburbs, here acts as a metaphor for personal territory and societal divisions in the provinces of a country at war with itself over BREXIT. Councillor Stephen Cohen was invited to ceronially “open” the exhibtion by destroying the boundary fence.

Buffer Zones brings together the works of thirteen citically acclaimed artists in a physical commentary on the geo-political, social economic and cultural impacts of borders. The audience is invited to make a precarious journey though barricades, borders and partitions to experience Buffer Zones at Paradise Works. Conceived during the United Kingdom’s attempts to leave the EU, themes of division, separation of community and physical space take the fore in this immersive exhibition.

Buffer Zones was curated by Nat Pitt, (The Manchester Contemporary and Divison of Labour) Division of labour