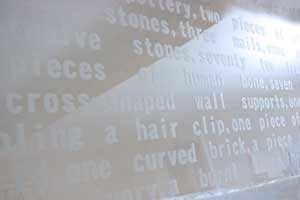 Finding Treblinka, Artists Respond, is a touring group exhibition, to The Museum of Matrydom and Struggle, Warsaw, Poland, and The Weiner Libaray London with artists Jenny Steele, Dave Griffiths and Janine Goldsworthy, curated by Michael Branthwaite in collaboration with forensic archeologist Professor Caroline Sturdy Colls and The University of Staffordshire. The exhibiton explored the ground breaking research by Caroline Sturdy Colls into the Treblinka camp which revealed the true history of the camp as a site of extermination of over 800,000- 1 million Jewish people, Roma, Polish and minoriy groups during the Holocast by the Nazis.

For Treblinka Finds, my artwork focused on the objects found during the archeological excavation of a one metre pit at Treblinka. The objects found in the pit confirmed the purpose of the camp as a death camp rather than a work camp as previously thought. The list of objects have been translated into Polish and printed onto Perspex the same size as the excavated pit using a font resembling the signage used at the camp.

A catalogue accompanies the exhibition. Link to book