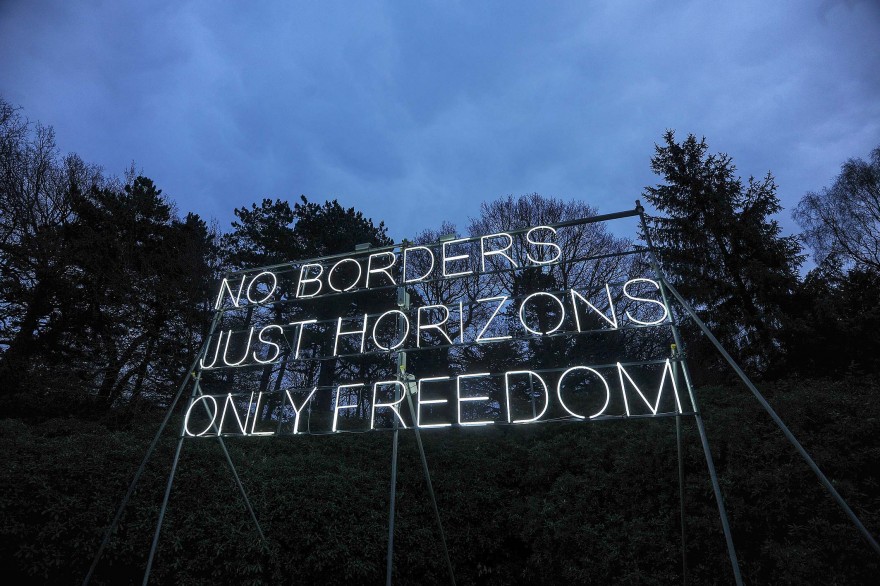 No Borders at Mellerstain House on The Scottish Borders, Photo credit Sean McCrossan

No Borders at Mellerstain House

No Borders at Alnoba USA

A second edition has recently been acquired for the collection by Alnoba Sculpture Park, New Hampshire, USA and is on permenant display in the Art Park.

The quotation “NO BORDERS NO HORIZONS ONLY FREEDOM“ is borrowed from Amelia Earhart, the American pioneer aviator, feminist icon, and explorer. She was one of only ten women to hold a pilots licence in 1932, and was the first woman to fly solo across the Atlantic. Her quote resonates in the polictics of today and can be read through a contemporary political lens referencing the implications posed by BREXIT regarding the Irish border; the ongoing debate in Scotland over Scottish independence and the many current border conflicts over contested land across the globe, including President Trumps USA border wall.

It can also be read as part of the #MeToo generation of women’s voices as a statement of intent regarding physical borders, personal boundaries, creative ambitions and freedom of movement.

No Borders acts in lieu of a protest placard for many who live under threats to freedom of movement, thought and creativity posed by those holding positions of power.

A limited edition print of No Borders is available and has recently been acquired by The Government Art Collection and a wall based neon is also available. Enquiries and editions from Division of Labour Gallery

A No Borders tote bag is also available in the shop at Yorkshire Sculpture and at Paradise Works or by contacting me at hilaryjack1@gmail.com