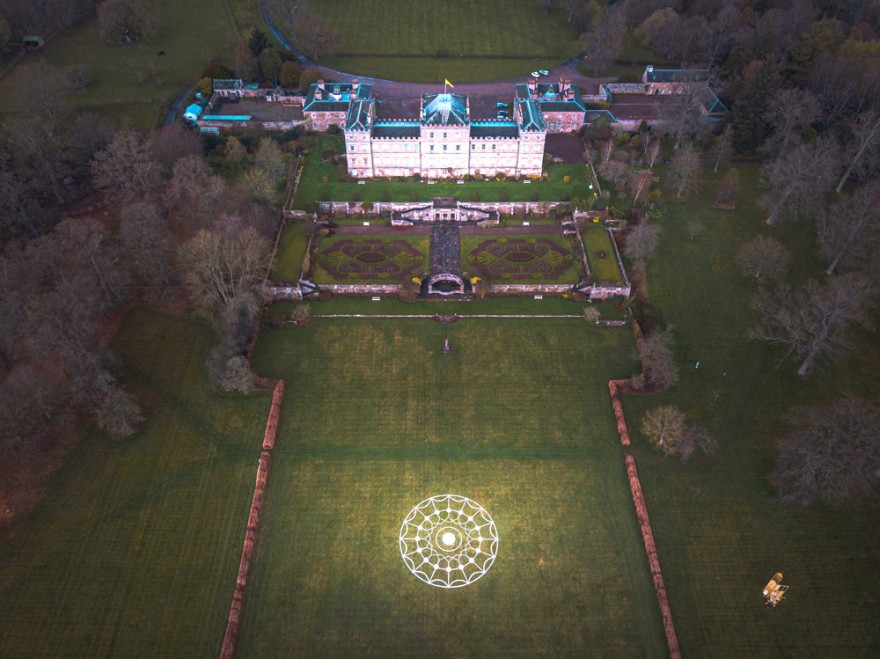 Aerial view of In Memoriam

The Messenger by Hilary Jack

Look Out, a time capsule containing fcsimiles of objects from Mellerstain bult to resemble the Peel Tower whihc once stood at Mellerstain

The Messenger by Hilary Jack, Borders Sculpture Park, Mellerstain House, Kelso. Hilary is seen putting the finishing touches to her work. 1. Is a statue of Hermes who has been reunited with his cadeusius. The statue refers to the origin of the house and Lady Grisel Baillie, 2. In Memoriam which echoes the ceiling roses in the Robert Adam, Mellerstain house and also echoing the fact that the previous 13th Earl John Baillie was an expert on crop circles. 3. Lookout - in the shape of a Peel Tower castle from the Border Reivers and raiders period - referred to by Lady Grisel Baillie in her book of household management. 4. No Borders is a large neon looking to the Scotland England border containing a quote from Amelia Earhart the famous aviator. The Messenger is a series of four site-specific works in the landscape, made by British artist Hilary Jack in response to the rich history of Mellerstain House and the fascinating characters who have lived there. They reveal the intriguing story of the family that has created and maintained of one of Scotland’s most outstanding examples of 18th century architecture, as well as the turbulent history of the Borders. Curated by Sarah Coulson of Yorkshire Sculpture Park, each of Jack’s four artworks in The Messenger focuses on a different aspect of this compelling narrative, from Mellerstain House’s foundation in 1725 to the present day. The first lady of the house, Lady Grisel Baillie (1665 – 1746) stands as a strong and inspiring female presence throughout the series and was a source of particular inspiration to the artist. Jack’s exciting project is the second commission by Borders Sculpture Park., Scotland UK 0305/2018© COPYRIGHT PHOTO BY MURDO MACLEODAll Rights ReservedTel + 44 131 669 9659Mobile +44 7831 504 531Email: m@murdophoto.comSTANDARD TERMS AND CONDITIONS APPLY See details at http://www.murdophoto.com/T%26Cs.html No syndication, no redistribution. sgealbadh, A22G5C

Peel Towers were often set alight as beacons to warn of Border raids or to distroy the possessions locked inside to prevent raiders from stealing. At the closing party of The Messenger Look Out was set on fire for the finale.

Aerial view of No Borders

The Messenger is a series of four site-specific works in the landscape, made in response to the politics of place at Borders Sculpture Park. Commissioned by Yorkshire Sculpture Park curator Sarah Coulson. The four artworks are In Memoriam, a 25 metre drawing based on the famous Robert Adam plaster moulding ceiling roses inside the house. In Memoriam also acts a memorial to the 13th Earl, John Baillie, a peer and politician who had an extensive knowledge and interest in crop circles and the paranormal.

Look Out is a tower with a smoking chimney, based on the Peel Towers of The Borders which were used as beacons and to store possessions and livestock during raids by Border Reivers in this area. At the closing party of The Messenger Look Out was set on fire to reference the fate of many Peel Towers under attack throughout the turbulent history of The Borders.

No Borders is a neon text piece. The adopted quotation is by the pioneer aviator and feminist icon Amelia Earhart. The artwork sits below the formal gardens at Mellerstain looking towards Anglo Scottish border which boundaries the land. As well as referencing personal and creative freedoms the text piece can be read through a contemporary political lens in 2018 as debate continues over Scottish Independence, Brexit borders and global conflicts regarding boundaries. No Borders is now on exhibition at Yorkshire Sculpture Park as part of OPENAIR2019 and has been aquired by Alnob Sculpture Park USA. More details No Borders

The ancient statue of Mercury has stood on the lawn at Mellerstain House for decades, his bronze caduseus lost long ago. In Greek mythology Mercury is the emissary to Gods travelling freely between the land of the living and the dead using the special powers of his caduseus to do so. For The Messenger Ive replaced his caduseus with a new contemporary perspex version.